An L.A. Times report which characterizes the Sovereign Citizen movement as “a major threat” on a par with Islamic extremism infers that “more than 100,00 Americans” are domestic terrorists as a result of their affiliation with the group. 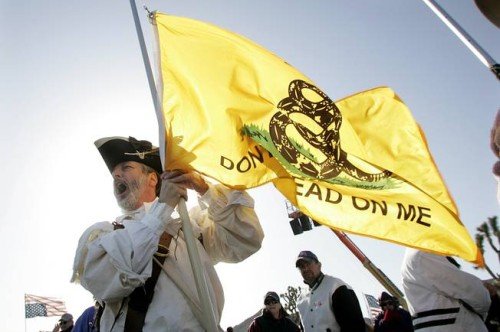 The article, entitled ‘Sovereign citizen’ movement now on FBI’s radar, frames the belief that “the U.S. is essentially under martial law,” along with support for reintroducing the gold standard, as political views indicative of violent extremism.

The report quotes Mark Potok of the Southern Poverty Law Center, who in one fell swoop demonizes “more than 100,00 Americans” as domestic terrorists.

“This is a movement that has absolutely exploded,” said Mark Potok, a senior fellow at the Southern Poverty Law Center, a nonprofit organization based in Montgomery, Ala., that tracks domestic terrorists and hate groups. More than 100,000 Americans have aligned themselves with the sovereign citizens, the center said.