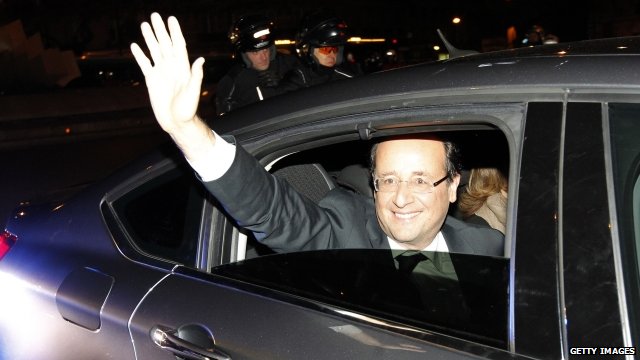 Mr Hollande – who polled just under 52% of votes in Sunday’s run-off – spoke of his pride at becoming president.

Analysts say the vote has wide implications for the whole eurozone. Mr Hollande has vowed to rework a deal on government debt in member countries.

Shortly after polls closed at 20:00 (18:00 GMT), French media published projections based on partial results giving Mr Hollande a lead of almost four points. Turnout was about 80%.

The excitement has been building for two weeks, it was mixed with relief and perhaps some disbelief when the first estimate was broadcast. They have waited 17 years for a Socialist president.More than 350 polls published since the beginning of this campaign said he would win – still they cannot quite believe it. President Hollande: “It still takes some getting used to,” said Senator Helene Conway-Mouret. “A year ago you would never have dreamed it.”

A teacher and a lifelong Socialist was standing next to me as the result came in – he wept. “It’s an incredible moment,” he said. “Not just for the Socialist Party but for France, for Europe. ”

In over 30 years in politics Mr Hollande has never served as a minister. For much of his tenure as the party’s first secretary from 1997 to 2008 he was seen as a consensus manager – a listener more than a visionary. Now he must lead, making tough choices to put France on the path to recovery.

Jubilant Hollande supporters gathered on Place de la Bastille in Paris – a traditional rallying point of the Left – to celebrate.

Mr Hollande – the first Socialist to win the French presidency since Francois Mitterrand in the 1980s – gave his victory speech in his stronghold of Tulle in central France.

He said was “proud to have been capable of giving people hope again”.

He said he would push ahead with his pledge to refocus EU fiscal efforts from austerity to “growth”.

“Europe is watching us, austerity can no longer be the only option,” he said.