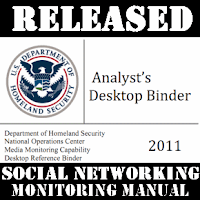 Ever complain on Facebook that you were feeling “sick?” Told your friends to “watch” a certain TV show? Left a comment on a media website about government “pork?”

If you did any of those things, or tweeted about your recent vacation in “Mexico” or a shopping trip to “Target,” the Department of Homeland Security may have noticed.

In the latest revelation of how the federal government is monitoring social media and online news outlets, the Electronic Privacy Information Center has posted online a 2011 Department of Homeland Security manual that includes hundreds of key words (such as those above) and search terms used to detect possible terrorism, unfolding natural disasters and public health threats. The center, a privacy watchdog group, filed a Freedom of Information Act request and then sued to obtain the release of the documents.

The 39-page “Analyst’s Desktop Binder” used by the department’s National Operations Center includes no-brainer words like “”attack,” “epidemic” and “Al Qaeda” (with various spellings). But the list also includes words that can be interpreted as either menacing or innocent depending on the context, such as “exercise,” “drill,” “wave,” “initiative,” “relief” and “organization.”

These terms and others are “broad, vague and ambiguous” and include “vast amounts of First Amendment protected speech that is entirely unrelated to the Department of Homeland Security mission to protect the public against terrorism and disasters,” stated the Electronic Privacy Information Center in letter to the House Homeland Security Subcommittee on Counterterrorism and Intelligence.

The manual was released by the center a week after Homeland Security officials were grilled at a House hearing over other documents obtained through a Freedom of Information Act lawsuit that revealed analysts were scrutinizing online comments that “reflect adversely” on the federal government. Mary Ellen Callahan, the chief privacy officer for the Department of Homeland Security, and Richard Chavez, director for the National Operations Center, testified that the released documents were outdated and that social media was monitored strictly to provide situational awareness and not to police disparaging opinions about the federal government. On Friday, Homeland Security officials stuck by that testimony.