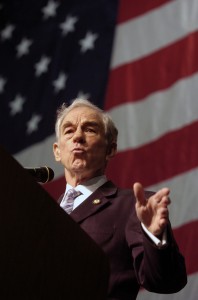 Press Release from Ron Paul 2012 Campaign:
Paul’s rivals have voted for debt-ceiling increases and/or created a climate that begets more borrowing from foreign sources and taxpayers

Despite the federal debt now being equal to America’s GDP, Obama wants to exercise his option to again raise the debt ceiling as stipulated in a 2011 budget agreement that creates the mechanism for near-automatic sustained debt pileup.  Ron Paul is the nation’s number-one defender of the rights of taxpayers, who along with their children and grandchildren will trade their hard-earned wages for higher taxes and the coming inflation tax Paul warns about.

The notion that borrowing money from foreign investors and expanding government is necessary, in good times and bad, is a common theme among Paul’s rivals for the Republican nomination.

Gingrich also lobbied for Freddie Mac prior to the housing market collapse and lobbied for the individual mandate before the passage of Obamacare.  The resulting costly housing bailouts for lenders and GSEs that the Congress, and Presidents Bush and Obama approved have made debt-ceiling increases even more likely.

Specifically, Gingrich’s lobbying for Freddie Mac stymied a quicker housing recovery by ensuring that a market-wide price correction never occurred.  Rather, payments to his lobbying clients were his priority.  With lenders buoyed by Gingrich practices that support mal-investment, homeowners facing foreclosure lost the opportunity to renegotiate directly with lenders because the terms were pre-set by agreements between politicians doling out tax dollars and lenders holding the foreclosed at bay.  Unquestionably, the housing bailout for lenders – disguised as relief for homeowners – occurred because insider lobbying created it and borrowing was the funding mechanism.

Also regarding the former House Speaker, the growth in government Obamacare is causing thanks to Gingrich’s support for the individual mandate makes future debt increases certain as Americans discover that Washington traded the doctor-patient relationship for an unsustainable, entitlement program that will naturally require more borrowing to contain.

Lastly on Gingrich, he supported TARP – a transfer of overseas wealth to several large U.S. financial institutions.  TARP is a key driver of borrowing and debt, necessitating increased limits on borrowing.

If Gingrich were to continue with his spendthrift habits as a lobbyist – or worse, as President – there would be sanctioned increases in the debt ceiling and a climate of borrowing, simply to grow government, will thrive.

What’s more, in 2004 Santorum worked hard getting 10,000 votes to help Arlen Specter defeat fiscal conservative Pat Toomey in a race for a Pennsylvania U.S. Senate seat.  To be sure, Santorum has said in the past that he is “no longer a deficit hawk,” which bodes poorly for the American taxpayer left on the hook when Washington spends away the future.

In addition to voting in favor of increasing the debt ceiling, Santorum is antagonistic toward Right to Work protections that keep industry strong.  If Santorum supports the interest of organized labor above those of employers and individual workers, industries with a high instance of union membership will remain weak and always be candidates for bailouts.  More bailouts mean more borrowing, unless the U.S. Government has accumulated a sovereign wealth fund, linking Santorum’s hostility toward Right to Work laws with a culture of endless borrowing.

Santorum also supported TARP, contributing to his profile as someone willing to spend hundreds of billions of dollars in borrowed money when the opportunity arises.

As a left-moderate Massachusetts governor, Mitt Romney was the architect of a costly health care program that Obama gleefully calls the basis for Obamacare.  On a national scale, the President’s Romneycare inspired entitlement will require borrowing from foreign sources as the program becomes unglued from its presumed cost projections and spirals into insolvency.

As private employers continue to abandon their healthcare policies and direct workers toward single-payer exchanges, the federal government will institute a national healthcare system.  The private sector economy will weaken and revenue to pay for health exchanges will decline.  With the tax base further stressed, Washington will then shift to paying providers using borrowed money to meet annual requirements.

There is no logical reason to believe that Romney will succeed in repealing or defunding Obamacare if the program, in effect, is modeled on his own despite his declarations to do so.  In fact, Romney will fail to win over Republicans, independents, and disaffected Democrats if he gains the nomination because Obama’s highest achievement, popular with progressives, is in effect Romneycare.  Obama will be re-elected, he will levy threats about social security checks going un-mailed, and the borrowing culture will persist.

Lastly on Romney, he too supported TARP as a means of propping up the U.S. economy and preventing an economic calamity.  Neither happened, yet hundreds of billions of dollars were spent on this venture with the blessing of ostensible private-sector cheerleader Romney.

“Ron Paul is taking the lead among his competitors in fighting for the interests of present and future taxpayers.  He’s going to Washington to reiterate his longstanding opposition to increasing Washington’s credit card limit merely to advance the status quo, to grow government, and to postpone the hard choices found in his ‘Plan to Restore America,’” said Ron Paul 2012 National Campaign Chairman Jesse Benton.

“Voters want to know exactly where Ron Paul’s rivals stand on the issue not only of directly increasing the debt through voting.  They want to know if their records illustrate longstanding contributions to an atmosphere that encourages borrowing in the first place.  One need only look to the records of Dr. Paul’s competitors Newt Gingrich, Rick Santorum, and Mitt Romney for an answer to this question,” added Mr. Benton.