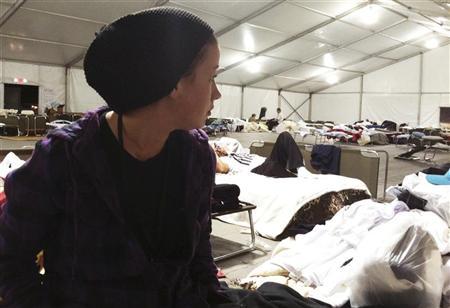 It is hard to sleep at night inside the tent city at Oceanport, New Jersey. A few hundred Superstorm Sandy refugees have been living here since Wednesday – a muddy camp that is a sprawling anomaly amidst Mercedes Benz dealerships and country clubs in this town near the state’s devastated coastal region.

Inside the giant billowy white tents, the massive klieg lights glare down from the ceiling all night long. The air is loud with the buzz of generators pumping out power. The post-storm housing — a refugee camp on the grounds of the Monmouth Park racetrack – is in lockdown, with security guards at every door, including the showers.

No one is allowed to go anywhere without showing their I.D. Even to use the bathroom, “you have to show your badge,” said Amber Decamp, a 22-year-old whose rental was washed away in Seaside Heights, New Jersey.

The mini city has no cigarettes, no books, no magazines, no board games, no TVs, and no newspapers or radios. On Friday night, in front of the mess hall, which was serving fried chicken and out-of-the-box, just-add-water potatoes, a child was dancing and dancing — to nothing. “We’re starting to lose it,” said Decamp. “But we have nowhere else to go.”

The tent city is emblematic of the crisis left by Sandy: the tens of thousands of people who have no place to live. Some are without power and heat – even if the utilities have their power back, their electrics and heating systems in their homes may have been destroyed by the floods. They are the short-termers. Others have a longer-term problem – their houses were made completely uninhabitable by flooding, ripped apart, or burned to the ground. And they pose a far more daunting challenge.

For now, all are without homes in one of the harshest housing markets in the world, with low vacancy rates and high rents. “There’s inventory in other parts of the country, but not here,” said University of Pennsylvania Wharton School Professor Susan Wachter.

To be sure, no one has been forced to stay in the tent city. But many say they have no other immediate option.

FEMA has plans to bring trailers into New Jersey to increase the amount of temporary housing.

While FEMA is helping at the tent city, it is being run by the state of New Jersey. The state’s Department of Human Services did not immediately return calls seeking comment on Saturday morning.

Brad Gair, New York Mayor Michael Bloomberg’s new emergency housing czar, has also talked about the complexities of post-disaster housing. The authorities in the region simply don’t have access to enough alternative housing or hotel rooms for all those who have been displaced. And all the problems this creates are on display here, where life has been even worse than during the storm, evacuees say.